History of the Volkswagen Scout

Jump to Latest
VeeDub
Now that the Scout is making its return as an electric SUV and pickup brand, let's take a look back at the Scout name. 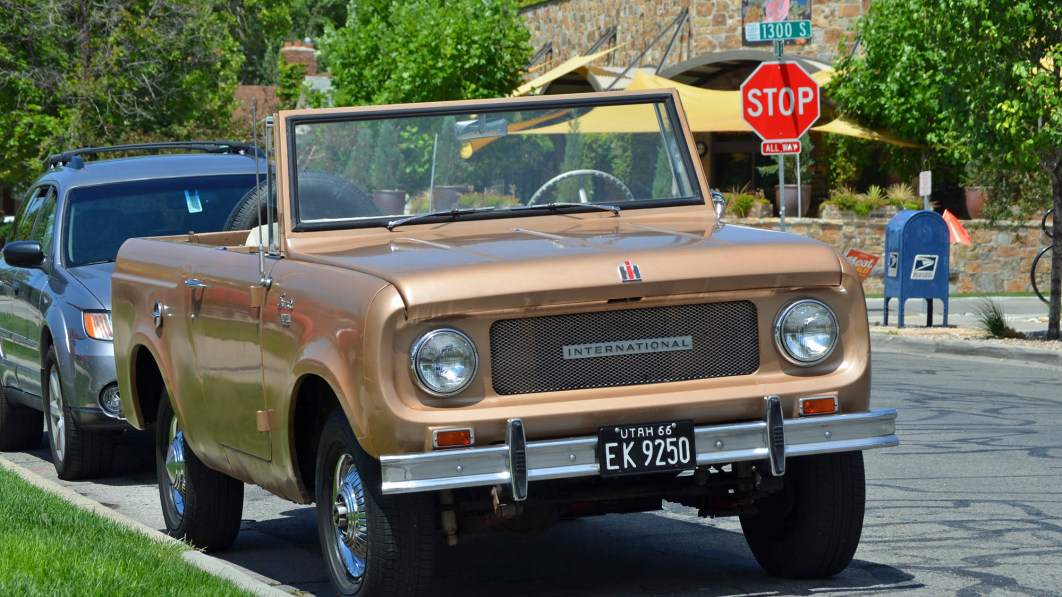 Volkswagen is resurrecting the Scout as an EV. But what was the Scout? - Autoblog

Volkswagen will bring back the Scout, but what's a Scout? It was an innovative off-roader built by International-Harvester from 1961 to 1980.

www.autoblog.com
The original Scout
Let's dispel a myth before it's cemented into a fact on social media: Scout has never been a brand. It was a nameplate, much like Golf or Mustang, and the brand that marketed it was International-Harvester. While the firm was better known for building farming equipment, it made a dizzying selection of products including freezers, lawn mowers, vans and trucks. Its pickups were never as popular as the Big Three's, but they earned a reputation for being tough and innovative; International-Harvester notably gets credit for making the first four-door crew-cab pickup, which it named Travelette and launched in 1957. It's with this experience that the firm jumped into the SUV segment.

Released for 1961, the original Scout was a forward-thinking off-roader that was arguably the Jeep CJ's first direct rival. Sure, the Toyota Land Cruiser disembarked on our shores in 1958 but only one example was sold that year and it remained a relatively obscure truck by the time the Scout began arriving in showrooms. Like the CJ, the Scout was envisioned as a simple, go-anywhere trucklet that could be put to work on a farm or taken on a long Memorial Day fishing trip. International-Harvester offered the first-generation model (called "80" internally) with several removable top options including a vinyl Cab Top, a steel Cab Top and a steel Travel Top. The first two made the Scout a pickup, while the latter turned it into a wagon. Regardless, the Scout came standard with a 2.5-liter four-cylinder engine (which was essentially a V8 cut in half) rated at 93 horsepower and 135 pound-feet of torque. Rear-wheel drive came standard, and four-wheel drive was optional.

International-Harvester made numerous updates to the Scout during the 1960s to keep it competitive. Roll-down windows became available as an option in 1962, while 1965 brought an improved model called 800 internally (shown above) and characterized by a new-look front end and a longer list of standard features, among other changes. Buyers who wanted more power got their wish granted in 1966, when the list of options grew with the addition of a V8 and, believe it or not, a turbocharged (!) 2.2-liter Comanche four-cylinder rated at 111 horsepower.

These updates carried the original Scout and its derivatives through the 1971 model year, but a lot had changed in the automotive landscape since its unveiling. SUVs were no longer an eccentric niche for farmers and hunters. Jeep CJ sales remained strong, the Toyota Land Cruiser had established a secure foothold in the United States, and the Ford Bronco and the Chevrolet Blazer were stealing the spotlight.

The Scout II
Released as a 1971 model, and briefly sold alongside its predecessor, the second-generation Scout was aptly named Scout II. It shared little more than a name with the original model: it was larger, less rudimentary, and available with bigger V8 engines. Shown above, it's this version of the Scout that the sketch released by Volkswagen in May 2022 seemingly alludes to; the kink in the beltline is unmistakable.

At launch, the Scout II came standard with a 3.2-liter four-cylinder engine rated at 93 horsepower and 143 pound-feet of torque and rear-wheel drive. Buyers could order a V8 (or a straight-six) and four-wheel-drive (with manual or automatic locking front hubs) at an extra cost.

While the born-again Scout will have four doors, the Scout II was only available as a two-door. Drivers who wanted a four-door International-Harvester were shown the huge Travelall, which competed directly against the Chevrolet Suburban. Several Scout II off-shoots were made during the 1970s, however. 1976 brought the Scout II Terra, a pickup released largely to fill the gap left by the firm's more work-oriented trucks that were axed after 1975, and the Scout II Traveler, a roomier model that partially filled in for the Travelall. Across the pond, Swiss firm Monteverdi even turned the Scout II into a stunningly luxurious SUV called Safari, though that's a different story for a different time.

New variants and option packages kept buyers interested in the Scout but all was not well under the surface, and several factors contributed to its demise. One is that demand for SUVs dipped in the late 1970s. If you were, say, Oldsmobile, that's fine; you could crank up Cutlass production. International-Harvester didn't have this option because the Scout II was its only entry into America's passenger-car segment. Another is that a United Auto Workers strike that lasted from November 1979 to April 1980 cost International-Harvester a tremendous amount of money. In spite of these setbacks, the company made a final round of updates to the Scout II for 1980. The two-wheel-drive variant was retired, rectangular headlights appeared, rust-proofing improved, and a Nissan-sourced turbodiesel engine was made optional.

Scout II sales ended after the 1980 model year, and International-Harvester left the light-duty truck segment to allocate all of its attention to its heavy-duty models. It was short on money but not short on ideas: it tentatively planned to release a Scout III for the 1982 model year, it experimented with fiberglass bodies, and it even evaluated expanding its range with a buggy and a minivan, among other body styles.

Written By:
VeeDub
Follow View All Authors
0 Replies
1 - 1 of 1 Posts

About this Article
0 likes
0 Replies
Written By: